Quote of the Episode: Anya: “Spike’s insane in the basement.”

Screenshot of the Episode: Willow returns to Sunnydale after a summer spent with Giles in England, as rehabilitation for her good girl gone bad incident of the previous season. She arrives with no one to greet her, because her friends can’t see her. Then a dead body turns up, and it’s been skinned. Willow scrambles to prove it wasn’t her by defeating the demon, but her invisibility leaves her at his peril.

ever was. Yes, Hush was nominated for an Emmy, and yes its gang of demons were particularly disconcerting. For me though, Gnarl has a special place as a creature that grab you in the dark, when you’re all alone. He is the scariest villain produced by the entire series, and this episode is always uncomfortable for me to watch.

Gnarl: “All alone. Are you frightened to be all alone?”

Although I’ve seen this episode many times, I noticed something this time around. When Buffy, Dawn, and Xander arrive home without Willow, they are discussing her disappearance. They’ve spoken to Giles about it and he feels bad for letting her return before she was ready. Then Dawn says this, “So Giles is blaming Giles, and we’re blaming us, *sighs* is anyone going to blame Willow?” Buffy gives Dawn a look of distain but Dawn has a point. There are different rules for the Scoobies. Take for example what Mark Field has to say about this episode:

“…compare Willow to Faith. Faith is still in jail, having turned herself in. Putting aside the practical question of whether Willow could be punished by others, Willow got to spend 3 months in England having Giles go all Dumbledore on her.”[i]

It is up to the group to electively decide who needs to be punished and how. However, Dawn has not been part of the group dynamics for as long as the rest. Although when she was inserted into Buffy’s life she was given an entire history, she was created, not born. She was too young for research, she was her mother’s ‘normal’ child and was often shown in completely ordinary teenage situations. It’s not the first time we see Dawn

speak out against the group think and although her comments often feel abrasive, she is an important portal to the outside world. For me this picture says it all (left). Dawn looks angry, because of the trust they put in someone who tried to kill her, “She didn’t finish!? She didn’t finish not being evil!?” This is because Willow is their friend, not because they believe fully in her rehabilitation.

Now I have a problem, as I often do, with what is deemed appropriate for television and popular culture in general. For example, although this show did push the boundaries of sex, especially LGBT sex, it was still relatively tame.

“Oops I didn’t know I couldn’t talk about sex.”[ii]

However, the television executives were fine with this (Right). So creepy demon, please feel free to peel the flesh from Willow’s bare stomach, and chow down. However if we 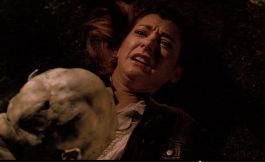 want to show a sex scene between Willow and Tara it must be done under the guise of a magical demon. (Once More With Feeling). This double standard has been addressed in Theodor Adorno’s article, “How To Look At Television.”[iii]

“The curse of modern mass culture seems to be its adherence to the almost unchanged ideology of early middle-class society, whereas the lives of its consumers are completely out of phase with this ideology… For example the concept of the ‘purity’ of women is one of the invariables of popular culture.”[iv]

Unfortunately Buffy herself falls prey to this trope in Season 2. Although the losing of ones virginity was presented in a novel way, it fails to show the young woman (and men) who are watching, that you are not more or less valuable because of your virginity. Your own sexuality is relevant and being ‘pure’ for your future love is not something you’re responsible for. The only person you have a responsibility to, is yourself… but I digress.

Willow has murdered someone, we cannot forget that. She tied Warren up and skinned him. Willow is forgiven because that is what is expected. This is provided for us in the rules of popular culture according to Adorno.

“The stereotype of the nice girl is so strong that not even the proof of her delinquency can destroy it; and, by hook or by crook, she must be what she appears to be.”[v]

Now let’s talk aesthetics. I’m sure this was intentional but I love to mention these things anyway:

So you can see on the left we have Xander / Buffy and on the right we have Anya / Willow. Of course this is good versus evil. Anya can see Willow. This may be because Willow only included Buffy, Dawn, and Xander in her unintentional spell. It’s more likely though that Anya is immune, as Spike is also able to see Willow. This is what makes the scene in the basement so magical. Spike is insane after getting his soul back, so talking to him is a rollercoaster in itself. Add invisible Willow into the mix and you get a beautifully shot scene.

Willow has turned to Spike, because she can’t find Buffy or Xander. She asks him about the skinned victim:

Willow: “It was skinned, what could do that?”

Willow’s starting to feel like maybe it was her that skinned the victim after all.

So I would like to end by firstly saying props to Camden Toy (right) for being the creepiest Buffy villain to ever grace our TV screens. He also played one of The Gentlemen

in the episode Hush,  and has played an Ubervamp a couple of times. Look though, he’s such a sweet looking man, how could we have ever been afraid of him?

Secondly this is the First Evil (below). It’s not Buffy. This happens in previous seasons as they use a shot of the Buffy Bot. I don’t know why but this has always frustrated me. Like it’s a cool shot, and I know it’s still technically Buffy, but it’s the First Evil using her image. Grr, Arrgh is

all I have to say about that. (If Whedon has addressed this at any stage, please let me know. It has annoyed me to no end for years!)

Finally, Willow is now in Buffy’s old room, and Buffy is in her mother’s room. This will prove significant for the rest of the season. Buffy has not only accepted her role as the Slayer, but she is now the leader of the household.

Notable music that year: Alicia Keyes “Songs In The Key Of A Minor,” Kings Of Leon “Because Of The Times,” Red Hot Chilli Peppers “By The Way,” Christina Aguilera “Stripped,” Avril Lavigne “Let Go,” Justin Timberlake “Justified,” Boards Of Canada “Geoghaddi,” Coldplay “A Rush Of Blood To The Head,” Foo Fighters “One By One,” Phil Collins “Testify,” Queens Of The Stone Age “Songs For The Deaf.”

Do you love Buffy? Check out my last post on the show:

This site uses Akismet to reduce spam. Learn how your comment data is processed.

Do Not Sell My Personal Information